North Wall, view to the northwest 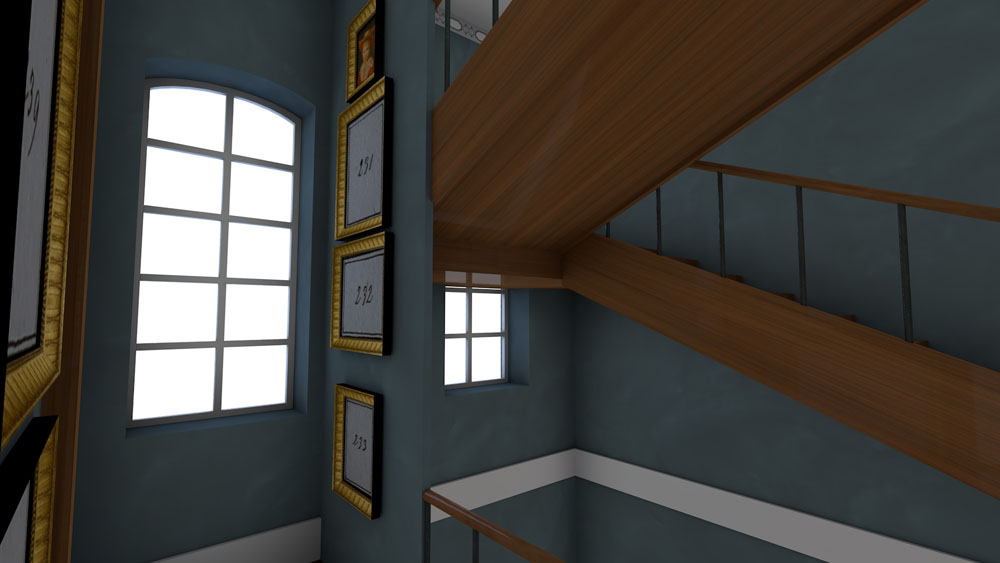 View to the northeast 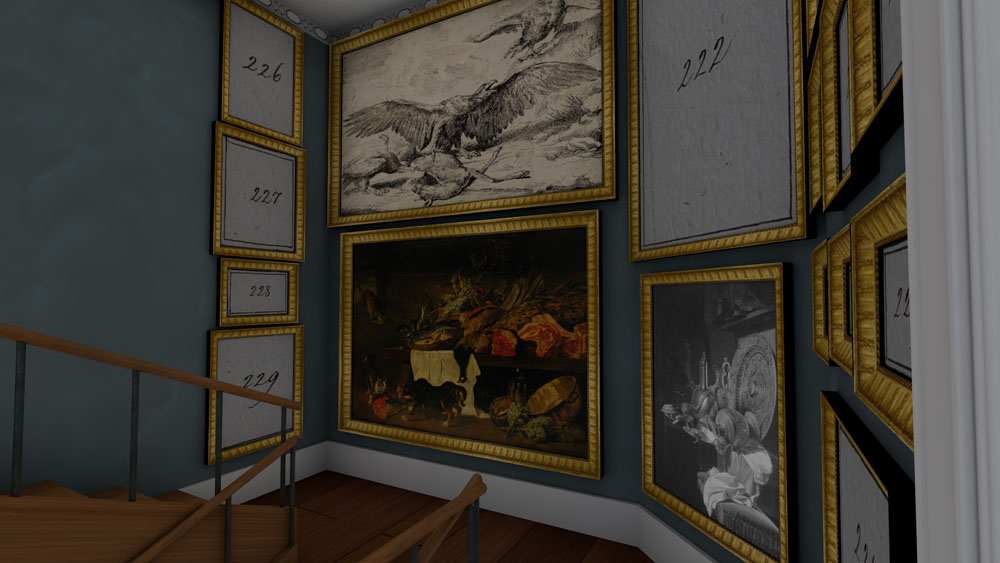 Johann Friedrich Städel had decorated every corner of his house with paintings. It is therefore plausible that he also used the stairway as an exhibition room. Of this part of the house, we know that it was a separate, closed space. Some of the paintings presented here were exceptionally large und formed a grandiose prelude to a visitor’s tour.

According to our reconstruction, a visitor went up a cantilever staircase with an intermediate landing. When turning, halfway up the stairs, the visitor would have seen two monumental animal paintings, the upper representing “Three Eagles Fighting over a Dead Deer” (inv.-no. 224) and the lower a “Pantry with Game”. The latter painting interested Städel mainly due to its depiction of a squabble between a dog and a cat over a piece of salmon (“Un chien et un chat se disputant une pièce de saumon […]”, inv.-no. 225). It was erroneously attributed by him to the most famous of all Flemish animal painters, Frans Snyders.

On the right, on a slanting section of the wall covering the chimney, one could see a still life with luxurious goldsmithery (inv.-no. 223). For a long time it was regarded as an original by the Dutch master Willem Kalf. The painting was admired by Goethe: “One has to see this work to understand how Art surpasses Nature, and what a man’s mind can lend to objects when he observes them with creative eyes. For me at least, it would not be a question if I had to choose between the golden vessels or the painting, I would choose the painting” (Goethe 1998, p. 420). It is not clear, however, whether this still life painting already occupied its prominent place when Goethe visited Städel’s house in 1797. It could have explained why the visitor may have been so impressed by it. In the case of a second painting emphatically mentioned by Goethe, its position at the time would certainly not have corresponded with its presumed, inconspicuous location in 1816. Goethe had praised the “Portrait of a Child with a Red Lined Straw Hat”, considered at the time to be a work by Rubens (inv.-no. 230): “Incredibly beautiful and painted naturalistically, without affectation, worthy of the greatest master, too pure, tranquil and, in a higher sense, tasteful for Rubens […]”. According to the hanging plan of 1816, however, this painting was displayed very high up on the wall.

Besides the fact that the greatly varying “divisions” (meaning the enclosed wall sections) indicated on the hanging plan overall fit surprisingly well with our reconstruction of the stairway, there is an additional argument supporting this solution: symmetrically arranged on both sides of the door in the gallery’s vestibule, high up on the wall, are two history scenes in half-length: a copy after the “Holy Family” by Anthony van Dyck and (a copy after?) Pietro Liberi’s “St Oswald with an Angel Holding His Helmet”, representing Dutch and Italian Baroque painting (inv.-no. 214 and 238).