Time Machine
The Städel Museum in the Nineteenth Century

Travel back to the nineteenth century! Thanks to 3D technology, a research team of the Städel Museum, over a period of several years, was able to create a highly detailed reconstruction of the historical presentation of its collection.

Visit the Städel Museum at its three historical locations:
the house of the museum’s founder, Johann Friedrich Städel, at the Rossmarkt in 1816,
the extensively renovated and expanded palace, opened in 1833, at the Neue Mainzer Strasse, and the new building, opened in 1878, at the Schaumainkai, which is still the current location of the Städel Museum in Frankfurt.

Thanks to many years of research, we were able to reconstruct and virtually revive the presentation of the Städel Collection of the nineteenth century in detail. The project has its roots in the 1990s, when, for research on the collection of Old Master paintings, the historical inventory books were transcribed and the provenance of the paintings evaluated. Since then, art historical interest in the historical interconnections of collections has grown. Historical presentations of, for example, the painting galleries in Dresden, Vienna, Paris and Düsseldorf have been analysed, but these are all princely collections of the eighteenth century. With the reconstructions of the rooms of the Städel Museum in the nineteenth century, we can now add an important new case study: the Städel is the oldest museum foundation based on a civic collection, which – especially in 1833 – functioned as a meeting place for the artistic avant-garde.

Discover the museum of 1878 virtually: with the free app for Gear VR, you can walk through the historical gallery rooms.

Walk through the old Städel
in Virtual Reality

What if you could look at your favourite painting in the collection as if it were 200 years ago? Travel back in time, together with the paintings! See the works in the context of their historical presentation and learn how they were regarded during that period compared to today. Each painting allows you the opportunity to click for further information: from the provenance history to excerpts from current scholarly catalogues.

Additionally, with the free software for PC or the virtual reality headset Gear VR, you can virtually observe the historical rooms of 1878 at the Schaumainkai from inside - that's the closest you can possibly get!

Nominated for the Webby Award 2017

The Time Machine VR app was nominated for a Webby Award 2017 in the category “Mobile Sites & Apps – Cultural Institutions”.

This implementation is an addition to the Städel Museum’s many other digital offerings: the 200th anniversary of the institution in 2015 gave us the opportunity to rethink the museum’s core tasks of education and research with digital possibilities. With innovative technologies and forms of storytelling we are able to provide a freely accessible and alternative offer additional to the actual museum visit, thereby considerably expanding the institution’s sphere of activity, no matter where you are located. 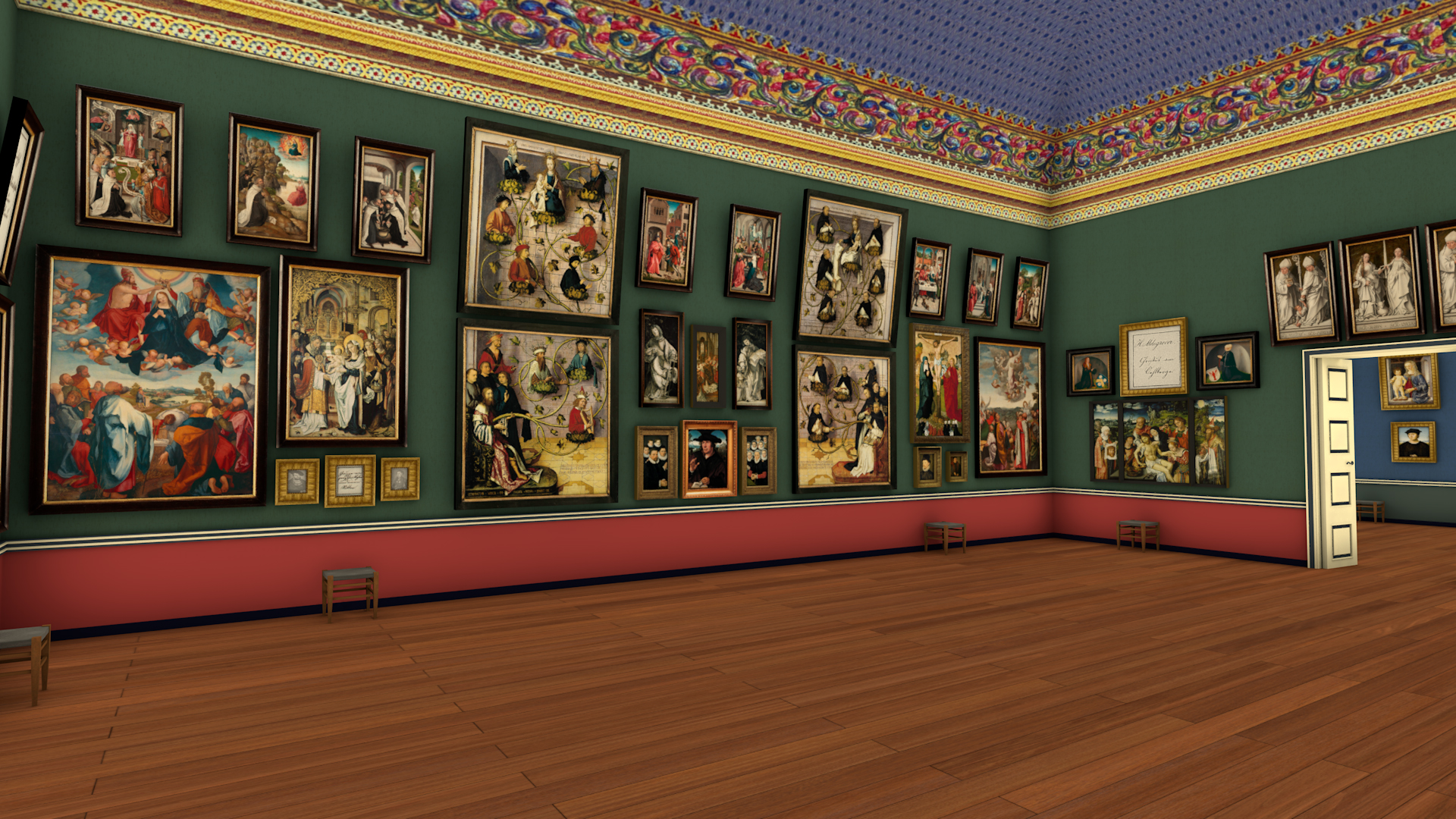 Early German room at the Städel Museum in 1833, view in southeastern direction. Reconstruction

Today, it seems natural to us that paintings are usually presented with sufficient distance from each other. This is supposed to allow for the optimal expression of each work’s artistic and aesthetic properties. This was not always the case. Ideas about how best to present art in a museum have changed frequently. They are dependent on the taste of the time and on art-theorical notions: what is good art? How do I recognise it? And how should it be exhibited so that visitors can come to an independent assessment?

The Städel Museum is one of the oldest museum foundations in Germany: on 15 March 1815, the Frankfurt banker and merchant Johann Friedrich Städel signed the last version of his will, in which he bequeathed his fortune and his art collection to the foundation to be named after him. Its mission was to maintain a public collection and to train artists. Städel died in 1816 and his private collection, which had only been accessible to his art-loving friends, was made into a public museum.

When the Städel Museum opened its first museum building at the Neue Mainzer Strasse in 1833, the collection’s profile had changed considerably: a private art collection had been replaced by a museum collection that presented the development of art through examples from the most prominent schools and art forms.
The high esteem of Renaissance art (and of antique art, at least represented via plaster casts) corresponded with the ideas of the German artist group of the Nazarenes, to which the management and directors of the Städel had been committed since the 1820s. The close integration of the museum collection and the art academy of the Städel School was fundamental: with this, the Städelsches Kunstinstitut set new standards. Today’s Städelschule was later acquired by the city of Frankfurt.

The Dutch and Flemish room of the Städel Museum in 1915

Up until the beginning of the twentieth century, the walls of the Städel Museum, similar to those of other art collections, were “plastered” with densely hung paintings, as the journey into the historical Städel shows. It was long suspected that this type of presentation served a purely decorative purpose. However, it actually had a deeper meaning: it allowed for direct and active comparisons.

The wall as a work of art

The gallery presentation made the walls themselves into works of art. The ideal of symmetry was decisive. The images were arranged along an imaginary central spatial axis, in vertical columns and horizontal registers. Through mirroring, different paintings could be juxtaposed. This even, harmonious type of presentation had been customary at least since the second half of the sixteenth century. 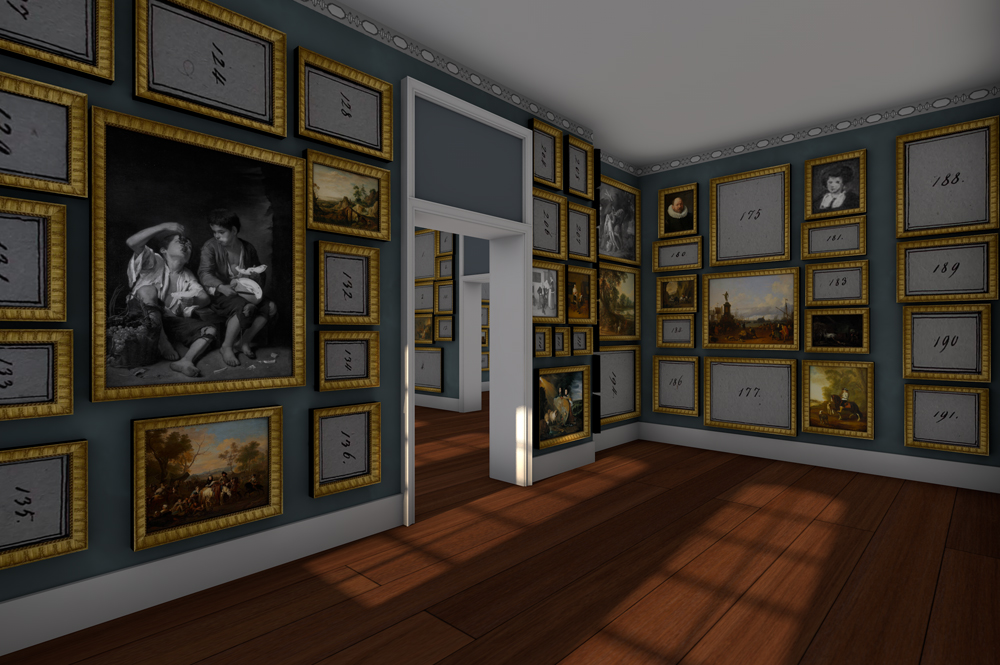 The “Room on the Left” in Städel’s house at the Rossmarkt in 1816. Reconstruction

In the eighteenth century, it was not only the individual painting that was supposed to represent beauty and perfection, but also the picture wall in its entirety. It stretched from the panelling, the “dado”, up to the frieze underneath the ceiling. At first glance, such “filled” walls appear to us as incomprehensible jumbles of different painting schools, genres and subjects. But now we know that there was a principle behind it: that of comparative viewing. Through this type of presentation, eighteenth-century collectors such as Johann Friedrich Städel let their paintings directly and explicitly correspond with each other, in order to create variety through similarities and contrasts. It was the visitor’s task to identify the individual presentation principle of the collector.

The same idea applies to nineteenth-century museums. The collection was sorted according to schools, meaning their national or regional origins.
Although the art historical evaluation and interpretation was already determined by the sequencing of the rooms, the painting genres were still alternated on the walls. Since labels were absent and visitors were at best able to consult a short, non-illustrated catalogue, it was their job to classify the artworks correctly. It was part of the pleasure of a museum visit to search for possible connections.